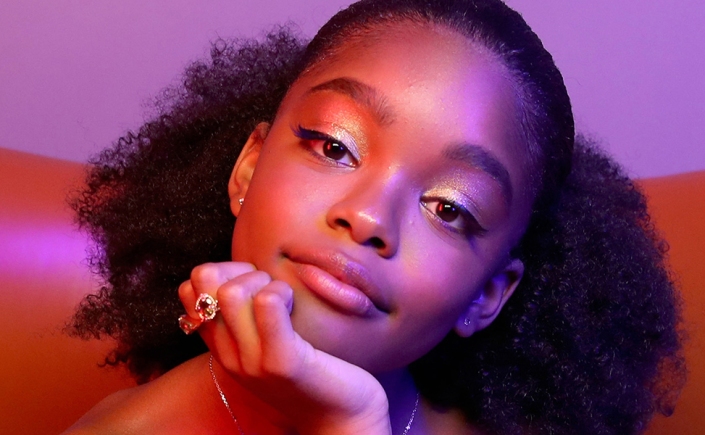 I’d hesitate to say someone could be called a Boss Bitch at 15 years old. But, if anyone could, it would be Marsai Martin. She’s an actress and the youngest executive producer in Hollywood.

She was born Caila Marsai Martin in 2004 in Little Elm, just outside of Dallas, TX.  While her dad wanted her to be an economist when she grew up, Marsai showed an inclination for acting from a very young age, mimicing characters from her favorite movies and TV shows before she could talk. Marsai’s life in TV and film started almost accidentally. At age 5, she and her parents were getting holiday photos taken at a mall. The photographer liked the way she posed and presented herself so he offered them a discount if they promised to show the photos to an acting agency. Three of the four agencies her parents contacted said they weren’t interested because they already have ‘a girl who looks like that.’ Those agencies missed out when they thought they only needed to sign only one young black girl. The fourth agency signed her immediately and she landed her first commercial, which led to dozens more. 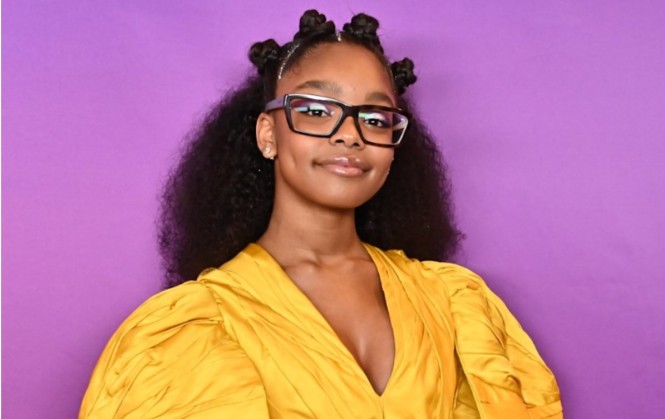 She studied with Texas acting coach Cathryn Sullivan. She attended a seminar in her hometown attended by Hollywood talent agents and secured a contract with an agency in Los Angeles. Her parents chose to move to Los Angeles to fully support her aspirations, and within a few months Marsai secured a deal for a national multi-production ad campaign with Meineke.

The next year, in 2014, Marsai was cast in her breakthrough role on the show black-ish. While she was simultaneously working on the show and focusing on her studies, she also appeared in a voice role in Nina, the film based on the life of artist and activist Nina Simone. And, just as Marsai’s career was kicking off, she made one of her biggest boss bitch moves – she fired her agents. They wanted her to ride the black-ish wave because there weren’t many roles for a young black girl. Marsai was thinking bigger and pushed her agents to create things for themselves. When they laughed at her, she cut them loose. Later, she and her parents formed Genius Productions. Who’s laughing now?

She made her film screen debut in 2016, playing a leading role in An American Girl Story – Melody 1963: Love Has to Win. Set in Detroit during the Civil Rights Movement, the movie tells the story of a young girl who faces adversity and discrimination in her hometown and learns to overcome it through her creativity and imagination. The lead character is brave, vocal, and aspirational – just like Marsai.

Marsai’s next big move was to become the youngest executive producer. At age 13, Kenya Barris took her meet Will Packer to pitch a modern take on Tom Hanks’ Big (her mother’s favorite movie as a kid) and which would feature an all-black cast. Packer said “this 10-year-old little force of nature comes into my office…she has this really well thought out, structured pitch that was good and worked! She had some scenes that she acted out in the moment and I was like ‘Okay, this young lady is not shy, she’s got a very strong sense of self but also a very strong sense of story.’ That’s what stood out.”

And so, Little was born – a story about a tech entrepreneur who wakes one morning as her 13-year old self. While the body-switching concept has been done time and time again, nothing had been done like this. There had never been a movie created by a black woman, directed by a black woman, written by a black woman, and starring black women. Little was directed by Tina Gordon, written by Tracy Oliver, and starred Marsai Martin, Issa Rae, and Regina Hall. And the story-line mirrors the intent: empowerment. Her co-star, Issa Rae said “we’ve all been afraid to speak up out of fear that if we do, we may end up losing something. That’s what [the main character] suffers from – she’s taken abuse for so long, she thinks by suffering in silence, she’ll be rewarded. But it’s really about telling herself to speak up and take what’s yours.”

“I think that Hollywood is blinded, and the industry has a certain cast in mind with these types of films. Black women aren’t the first ones they think of, because they don’t think we can win over certain audiences, or that the movies won’t be a worldwide success. I set out to make this film to prove that we can be just as good in this brand of humor, just as we can in other characters and genres.” – Marsai Martin

Marsai’s drive and determination to overcome the systemic problems in her industry is exactly what makes her a boss bitch.

Universal distributed Little, and then they signed Marsai and Genius Productions to a “first-look” production deal. That means Marsai is being paid by Universal to develop ideas for film and TV, the studio gets the first chance at creating them, and Marsai retains rights to what is produced and can take the idea to other studios of Universal turns it down. She is the youngest person to get a first-look deal at Universal.

“Marsai is a star on the rise. She is not only tremendously talented in front of the camera but offers a unique perspective as a creator and producer that will resonate with all audiences.” – Peter Cramer, president, Universal Pictures

There are already projects in the works as part of this first-look deal with Universal. The first film being developed is StepMonster, a comedy about a teenage girl who is adjusting to life with a new stepmother and “has to learn that sometimes the only way to tame a monster is to make peace with it… especially if the monster is you.” Then there is Amari and the Night Brothers, based on a book written by B.B. Alston which chronicles the journey of a Black girl who finds out that she has hidden powers. And, there is the comedy film, Queen, for which there are little details known.

It’s no surprise that Marsai has already received numerous awards and nominations. Her role in black-ish has earned her two NAACP Image Awards, as well as nominations and wins with the Young Entertainer Awards, Young Artist Awards, Teen Choice Awards, Screen Actors Guild Awards, and more.

When asked what she wants to do when she grows up, her answer is simply, “To be a legend.” Looks like you are well on your way, Marsai.