Last year during Black History Month I tried to do a post every day about an innovative black American whose name was likely not currently common knowledge, starting with Carter G. Woodson, the historian who started Black History Month, and ending with Octavia Butler, a science fiction writer. And, I tried to not focus on the “predictable” focus areas of black excellence, such as athletics and music. I wanted to hi-light how time and time again black Americans fought adversity, excelled, and changed our world, such as with Percy Julian, who was instrumental in creating birth control, or Bayard Rustin, the civil rights and gay rights activist who brought the non-violent teachings of Ghandi to MLK Jr.

“[Black History Month] is a time for us to learn and acknowledge the far-reaching and deep impact that black people have had in every aspect of our society. It is vital that we remember that America was born from the suffering of black people (and indigenous and Chinese). But, it is also vital that we be pro-active in learning and sharing and celebrating the contributions they have made to art, science, math, literature, pop culture, politics, social structure, and so much more.”

boss bitch [baws bich]
noun.
a woman who
1) has taken charge of her life;
2) lives by her own rules;
3) doesn’t take anyone’s shit;
4) cares not for what others’ think of her for she knows she is bad ass;
5) is a leader in her field;
6) is confident, strong, resilient, powerful, outspoken, and holds her  boundaries;
7) is a force to reckoned with.

Eartha Kitt is a boss bitch. She rose above the poverty of her youth and the secrecy around her white father and became a distinguished singer, actress, dancer, comedian, activist, author, and songwriter. Eartha was one of only a handful of performers to be nominated for a Tony (three times), a Grammy (twice), and an Emmy Award (twice). Plus, she looked amazing in a skin-tight leather one-piece suit.

Born Eartha Mae Keith, her life had a difficult start. She was born on a plantation in South Carolina to her black/Cherokee mother who was a sharecropper and an unknown white man (rumored to be the son of the plantation owner.) In fact, after her death in 2008, her daughter revealed that she died without ever knowing her father’s identity, after being denied the truth by officials in the American Deep South. Her exact age wasn’t known, until students from her hometown found her birth certificate in 1998, revealing that she was born on January 17, 1927.

She was severely ostracized for her light skin, clearly showing her mixed race. It was so bad that her step-father’s disdain led to Eartha being abandoned by her mother. Throughout her childhood she was physically, sexually and emotionally abused. At age 8 or 9,  she moved to Harlem to live with her aunt Mamie Kitt who enrolled her in Metropolitan Vocational High School.  Appropriately, this school would later become the high school that was the model for the art school in Fame, whose theme song epitomizes Boss Bitch.

Eartha Kitt, with James Dean behind her, in a dance class at Katherine Dunham Company.

Her aunt was extremely strict and also quite abusive, so Eartha quit high school at age 15 so she could work in a Brooklyn factory. She lived with friends or in the subways. A year later Eartha’s rise began because of a friend’s dare to audition for the first African American dance company, the Katherine Dunham Dance Troupe. She was admitted and spent five years studying Dunham’s fusion of ballet, modern, and Afro-Caribbean dance over drum rhythms. Eartha became a featured dancer and vocalist and ultimately became one of the most famous members of Dunham’s troupe.

Orson Wells was one of her many fans, and in 1950 he cast her as “Helen of Troy” in his stage production of Dr. Faust. In 1952, while performing at The Village Vanguard, Eartha was found by a Broadway producer who put her in New Faces. She performed ever night for a year in New York, captivating audiences and building her fan base. The show went on a national tour and 20th Century Fox released an independently filmed version of New Faces. 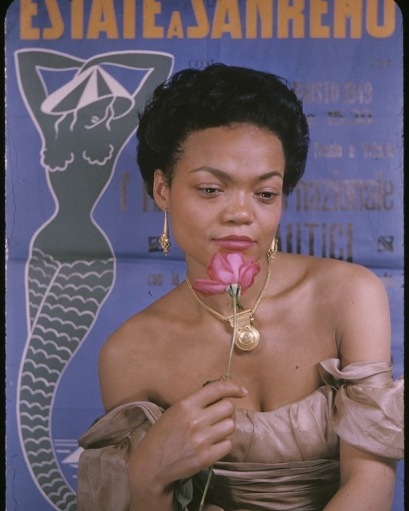 In 1953, Eartha got a recording contract at RCA which led to several best-selling records, including “Love for Sale,” “I Want to Be Evil,” and “Folk Tales of the Tribes of Africa” (which got her a Grammy nomination), as well as the famed C’est si bon and Santa Baby.

The childish yet provocative tone used in Santa Baby was in no way reflective of the woman Eartha was becoming. She spoke four languages – French, Dutch, German, and English – and she sang in 11 languages, including French, Japanese and Turkish. She then returned to Broadway and published an autobiography, Thursday’s Child, before she toured Europe. Her unique persona led to her soloing at a Paris night club. She garnered many fans, becoming the toast of the Continent.

While continuing her Broadway performances, Eartha hit the big screen in both the US and Sweden. She performed with Sidney Poitier in The Mark of the Hawk,  with Sammy Davis, Jr. in Anna Lucasta, and with Nat King Cole in St. Louis Blues. In 1967, Eartha stepped into possibly her most famous role of Catwoman. She was the first black super-villainess on mainstream TV. She made the character more ruthless while also very provocative, with her signature growl and cat-like features.

“As long as that audience gives me the type of applause that they gave me tonight, why shouldn’t I go on?” – Eartha Kitt

She believed her artistry and celebrity should be a vehicle to push for social change. MLK Jr. was a fan, sending her this telegram when she was performing at the Apollo Theater in Harlem:

“From democracy battle front in the deep South we extend our our sincerest thanks to you one of our nations most talented artist. What you have done this week speaks clearly of your earnest and deep concern for the freedom of our people […] in Birmingham Alabama and elsewhere in the South. May God bless you and your family and all the wonderful people in the Harlem Apollo Theatre who have made their contribution in response to your generous example.”

Eartha went to South Africa but refused to perform unless the audiences were integrated. And, at the peak of her fame, Eartha spoke out against the Vietnam War while at a White House luncheon hosted by Lady Bird Johnson. She told the First Lady “You sent the best of this country off to be shot and maimed. They rebel in the street. They will take pot. … And they will get high. … They don’t want to go to school because they’re going to be … off from their mothers to be shot in Vietnam.” This stalled her career in the States, but her fans continued to adore her vivid and sensual cabaret act that she performed across Europe. After being blacklisted from performing in the US for a decade, she returned in 1978 to perform at Carnegie Hall.

Her return to the US was followed by a second Tony nomination and a second autobiography, Alone With Me. In 1989, Eartha published I’m Still Here: Confessions of a Sex Kitten. Despite suing this label in the title of her book, Eartha actually scoffed at the moniker. In reality, her personality matched her name. Her daughter has said that Eartha found the sex-kitten label “a little more comical than anything else because she was, literally, such a down-to-earth-person, so connected to the earth. She grew her own vegetables and cultivated her own garden. She recycled. To be coined a sex kitten, she was anything but.” 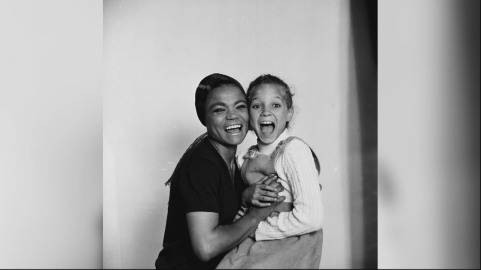 For much of her life, Eartha struggled with finding peace following abandonment and a childhood of abuse stemming from her being mixed-race. She said that “you are not wanted by the blacks and the whites couldn’t care less.” But, Eartha Kitt embodied resilience and strength. She found the love and support she lacked as a child when she had a child of her own. With each year that passed, Eartha became more solidified in her sense of self. She was a Boss Bitch who had met the likes of Albert Einstein, Winston Churchill and Queen Elizabeth II. In 2001, she published REJUVINATE, a best-selling book on fitness and feeling young.

I am inspired by Eartha Kitt’s confidence, resiliency, talent, determination, and take-no-shit attitude.