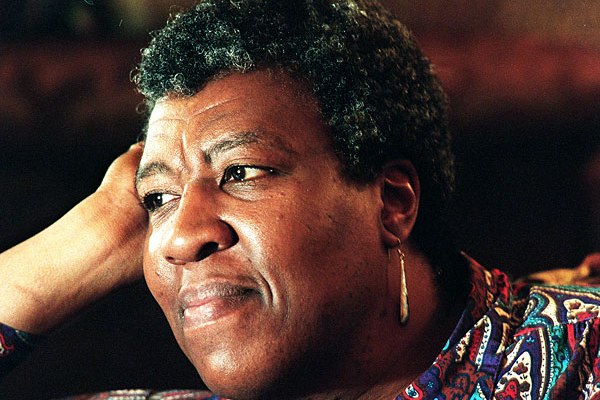 On this last day of Black History Month, let’s carry forward the legacy of black Americans who, despite their struggles in this violently oppressive country, have shown innovation, talent, depth, and courage. And, let’s look to what is possible in the future.

I was a fan of science fiction and fantasy fiction as a child. It was my favorite escape – imagining impossible adventures, fantastical creatures, emotion-driven characters, good and evil, mystery and magic, creativity and curiosity, exploration and adventure, legacy and the future. The majority of these stories, though, are obviously rooted in western, white patriarchal concepts. I distinctly remember my excitement when I first read Madeleine L’Engle’s A Wrinkle In Time – how refreshing to read about a young, female protagonist! Then, as an adult, I found Octavia Butler, a black woman science fiction writer – an afrofuturist who’s short bibliography shifted the white male-dominated field of science fiction with amazingly crafted worlds and powerfully disturbing stories of struggle, colonization and oppression, perseverance, hope, and change.

Octavia Butler was born in Pasadena, CA in 1947. Her shoe-shining father died when she was 7. Her mother was a housekeeper, raising Octavia (with help from her mother) in a strict Baptist home. Pasadena was an integrated community, allowing Butler to experience a diversity of cultures, while also seeing the class and race power structure at the homes her mother cleaned.

Butler, a shy daydreamer who was often bullied, spent much of her time at the library. Despite her dyslexia, she read constantly, and quickly fell in love with science fiction. She got her first typewriter at age 10, and started writing. After graduating high school in 1965, she took night classes at Pasadena City College. In her first year, she won a college-wide short-story contest, and in 1968, she earned an associate of arts degree with a focus in history.

After regular encounters with a classmate involved in the Black Power Movement who often loudly criticized black subservience, Butler responded by writing a story that gave historical context for that subservience, showing that it could be understood as “silent but courageous survival.” This would eventually turn in to the Patternist series of novels.

She enrolled at California State University – Los Angeles, but switched to taking writing courses through UCLA Extension. In 1969-70 she participated in two workshops that she credits with giving her “the most valuable help I received with my writing.” The first was The Open Door Workshop of the Screenwriters’ Guild of America, West – a program “designed to mentor Latino and African-American writers.” This is where she met the noted science fiction writer Harlan Ellison. He encouraged her to take the second influential workshop – a 6-week course in PA called The Clarion Science Fiction Writers Workshop. Here she first met Samuel R. Delany, a science fiction writer and literary critic who became a long-time friend of Butler’s.

In 1971, a short story of Butler’s was published in an anthology. In 1974, she started writing Patternmaster, which would become her first published novel two years later. Over the next eight years, she would publish four more novels, creating the Patternist series. The publication dates of the novels do not match the internal order of the series: the first in the series, Wild Seed, was written in 1980, followed by Mind of My Mind (1977), Clay’s Ark (1984), Survivor (1978), with Patternmaster closing the series.

In 1979, she published Kindred, wherein the female protagonist travels from 1976 to the 19th century and meets her slave and slave-owner ancestors.

“I began writing about power because I had so little.” – Octavia Butler

In 1980, she wrote the essay, “Lost Races of Science Fiction.” This is an out-of-circulation manifesto about the exclusion of black characters from science fiction.

Butler started to be noticed when, in 1984, her short story Speech Sounds won a Hugo Award, and in 1985, her story Bloodchild (about human colonizers who are used as hosts for their alien masters’ eggs) won the Hugo Award, the Locus Award, and the Science Fiction Chronicle Reader Award for Best Novelette.

She traveled South America, doing research for the Xenogenesis trilogy (published in 2000 as Lillith’s Brood), about genetically altered children that are abducted by aliens that have a third gender and do biological trading. Butler studied anatomy and molecular biology to write this story about human-alien genetic blending. Biologist Joan Slonczewski wrote an essay in response to this trilogy, saying that Butler’s vision was “remarkably consistent with modern molecular biology, even predicting developments that have occurred since the novels were written.”

Her dystopian novel Parable of the Sower was nominated for a Nebula award in 1994; the sequel, Parable Of the Talents, won that award in 1999. She had plans to write four more in the series, but depression that was partially induced by blood pressure medication forced her to abandon that project.

In 1995, Butler became the first science-fiction writer to be awarded a MacArthur Foundation fellowship – the sometimes-called “Genious Grant” given to those who show “extraordinary originality and dedication in their creative pursuits.” The hefty cash prize is an “investment in a person’s originality, insight, and potential.”

While living a quiet, asocial life in Seattle, in 2000, she received an award for lifetime achievement in writing from the PEN American Center.

In 2005, she wrote her final novel – a vampire/science-fiction called Fledgling, which, like her other books, examines race, community, and “diversity as a biological imperative.” That same year, Butler was inducted into Chicago State University’s International Black Writers Hall of Fame.

The Carl Brandon Society, an organization founded in 1997 to promote “the representation of people of color in fantastical genres,” established a scholarship fund in Butler’s name that sends writers of color to the annual Clarion workshops.

Octavia’s Brood: Science Fiction Stories from Social Justice Movements is an anthology of science-fiction stories written by organizers and activists (co-edited by adrienne maree brown and Walidah Imarisha), published in 2015. It’s since become a community of writers, artists and activists who view Butler’s work as a blueprint for organizing. “Whenever we try to envision a world without war, without violence, without prisons, without capitalism, we are engaging in an exercise of speculative fiction. Organizers and activists struggle tirelessly to create and envision another world, or many other worlds, just as science fiction does… so what better venue for organizers to explore their work than through writing original science fiction stories? Octavia’s Brood is a way to uncover the truths buried in the fantastical – and to inject a healthy dose of the fantastical into our search for truth.”

“What science fiction does is, it creates a future for the readers; black people, especially black women, are less considered in the future than almost anybody in this country. [Butler’s] legacy is her readers; what she has done is, she opened a door of possibility.” – mystery writer Walter Mosley, a friend and contemporary of Butler’s